Atheistic inquiry: “The Original sin was for disobedience in consuming the Forbidden fruit. Christians are you inherently sinful for what Adam and Eve did?”

Response to the Atheist…

The actual “original sin” was covetousness initiated by Lucifer in the Kingdom before the creation of Time, the Universe, the human genome. It is because of Lucifer’s rebellion that we exist as God the Father commissioned the Son, Jesus Christ, to take elements from the unseen Spiritual World and form those elements into matter that can be apprehended by life constrained by Time (Hebrews 11:3; John 3:35; Colossians 1:15-18; Genesis 1; John 1). God the Father then removed Lucifer, Lucifer’s destructive sin, from the Kingdom and placed the rebellious cherub angel upon the Earth in Eden. Lucifer was successful in enticing Eve to compromise with evil.

Adam’s sin was relenting to the enticement of his wife, Eve, and compromising with evil in direct contradiction to what Elohim had commanded i.e. the sin of disobedience. Though Eve was the first to compromise, Eve’s seed is not deemed as culpable for sin as is Adam’s sin because Adam received the edict to not compromise with evil DIRECTLY from Elohim but Eve received the edict as hearsay from her husband, Adam. It is in Adam that all of mankind dies (1 Corinthians 15:2).

It is Adam’s disobedience that resulted in a curse upon the human genome and genomic mutational degradation was initiated at that point in Time. As a result of Adam’s disobedience and rejection of God’s Covenant of Sustenance, we all inherit a sin-nature and through Adam’s corrupted genome we all die from sin as we are all sinners (Romans 3:23; Romans 5:12-15).

Jesus Christ entered Time through the womb of a virgin in order to circumvent the seed of Adam via Joseph; it is Messiah’s virgin birth that permitted Him to live in flesh and successfully fulfill the Law of Moses (Matthew 5:17-20) thereby making Himself the only acceptable sacrifice for sin and God the Father had mandated that ONLY sinless perfection, the blood of perfection, can atone for the sin of mankind (Hebrews 9:22; Hebrews 10:5; Matthew 26:28); therefore, God the Father made Him, Jesus Christ, who knew no sin to be sin our behalf so that we could receive His righteousness to atone for our sin and provide life in Eternity subsequent to the death of our body in Time (2 Corinthians 5:21)…this is victory over Lucifer earned for us by our God, Jesus Christ, at the Crucifixion (1 John 3:8; 1 Corinthians 15:57; John 3:16; Genesis 3:14-15). 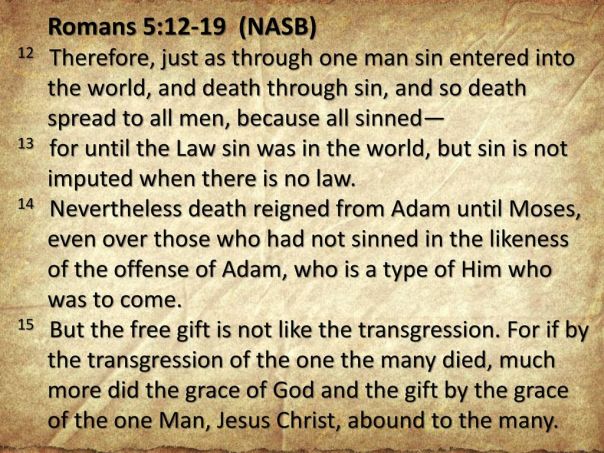