Atheist logic: “Christians, Everyone of the Senate Republicans are CHRISTIANS who dislike the Poor and do the bidding for the Rich for some reason that i can’t understand. They keep giving large corporations tax breaks, some who pay no taxes to the government and they pay low wages to their employees. That increases the tax the poor pay. Terrible example of Christians. Comments?”

Christianity serves the poor and feeds the poor and houses the poor through some of the largest Christian charities in the World. Corporations and small business are foundational to satisfying your belly and providing the goods and services and taxes that provide for the welfare state and the common good.

It is the Progressive-Socialist-Democrat Mayors and council persons that are responsible for the most pervasive poverty in our Nation’s history subsequent to the Great Depression.

It is the Progressive-Socialist-Democrat that promotes LGBTQ perversion, mental illness, disease, suicide, addiction, confusion, all of which are destroying America’s posterity.

It is the Progressive-Socialist-Democrat that is demanding open-borders permitting the invasion of undocumented illegal aliens that are driving down wages for the poor and meager working class in America, ravaging our healthcare system, murdering-raping our citizens.

It is the Progressive-Socialist-Democrat who hates America’s Constitutional Republic, our socioeconomic system of capitalism that has lifted more people out of poverty than any other form of economic system in the history of mankind while the mental illness of Progressive Socialism fights for an economic system, socialism i.e. communism, responsible for the death of 100-million people in the last 100-years. 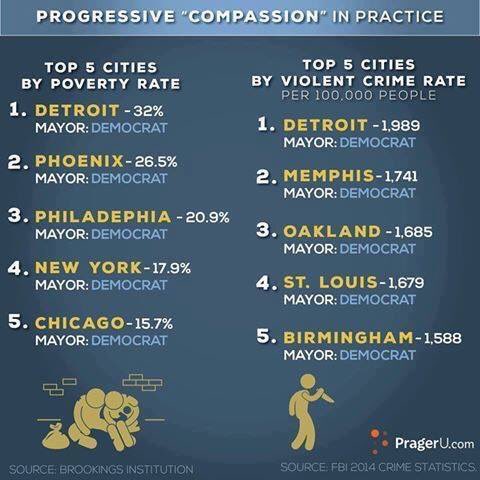