Theological discussion/premise on FB (True of False?): “DID YOU KNOW…God’s plan for salvation today is only found in Paul’s epistles. FAITH ALONE?” “Paul’s gospel (Romans 2.16, 16.25), was different from the gospel of Jesus and the Twelve. Its focus was not upon the identity of Christ but upon the work of Christ.”

Have you considered the eternal differences between “righteousness” and “justification-salvation?” It is possible to be “righteous” but not “justified.” Righteousness (a right standing with God the Father) is possible ONLY by “faith,” but “justification” is only possible by grace through faith in Jesus Christ as God who died to pay our sin-debt.

1) The Holy Spirit taught righteousness by “faith” alone in the Old Testament (Genesis 15:6).

2) Jesus taught righteousness by faith alone in the New Testament while under The Law (Luke 7:50).

3) Paul taught righteousness by faith alone in the New Covenant of Grace (Ephesians 2:8-9).

There is NO disparity in the theology of the Spirit, Jesus, Paul.

Paul’s teaching concerning faith as the precursor to righteousness (a right standing) with God the Father is NOT Paul’s doctrine but the doctrine of the Holy Spirit from the Genesis forward. Faith, alone, has always been the KEY to God the Father’s heart and men like Enoch and Abraham are examples of righteousness by “faith” alone in God.

“Then he [Abraham] believed in the LORD; and He reckoned it to him as righteousness.” Genesis 15:6 (NASB)

Some mistakenly believe that the Covenant of Law in the blood sacrifices brought righteousness with God but the writer of Hebrews, by inspiration of the Holy Spirit, tells us that the blood of bulls and goats could never take away sin. It was not the blood of animals that found righteousness with God but the “faith” of the one who offered the sacrifice in obedience to our God…it is the obedience by “faith” that saved, not the animals blood.

“For it is impossible for the blood of bulls and goats to take away sins.” Hebrews 10:4 (NASB)

So then, the animal sacrifices under the Levitical Law were simply an act of faith and they were also a foreshadowing of the blood sacrifice to be offered by the coming Lamb of God, Yeshua-Jesus, who would take-away the sins of the World.

“The next day John saw Jesus coming toward him, and said, “Behold! The Lamb of God who takes away the sin of the world!” John 1:29 (NKJV)

It is written concerning Jesus…

“For the Law, since it has only a shadow of the good things to come and not the very [a]form of things, [b]can never, by the same sacrifices which they offer continually year by year, make perfect those who draw near. 2 Otherwise, would they not have ceased to be offered, because the worshipers, having once been cleansed, would no longer have had consciousness of sins? 3 But in [c]those sacrifices there is a reminder of sins year by year. 4 For it is impossible for the blood of bulls and goats to take away sins. 5 Therefore, when He comes into the world, He says,

“Sacrifice and offering You have not desired,

But a body You have prepared for Me;

6 In whole burnt offerings and sacrifices for sin You have taken no pleasure.

(In the scroll of the book it is written of Me)

8 After saying above, “Sacrifices and offerings and whole burnt offerings and sacrifices for sin You have not desired, nor have You taken pleasure in them” (which are offered according to the Law), 9 then He said, “Behold, I have come to do Your will.” He takes away the first in order to establish the second. 10 By this will we have been sanctified through the offering of the body of Jesus Christ once for all.” Hebrews 10:1-10 (NASB)

The question is then asked, “Why Jesus?”

Even though mankind, from The Beginning, has found “righteousness” with God the Father by faith, alone…righteousness void atonement for sin will NOT permit entrance into the Kingdom of God where nothing impure is permitted to dwell.

“…and nothing unclean, and no one who practices abomination and lying, shall ever come into it, but only those whose names are written in the Lamb’s book of life.” Revelation 21:27 (NASB)

The sinless perfection of Jesus Christ was essential to pay the sin-debt of mankind and it is ONLY by grace (unmerited favor from God) through faith (trusting-believing) in what Jesus Christ did for you and me at the Crucifixion, shedding His innocent blood to pay our sin-debt, that mankind can find atonement for sin and the imputation of Messiah’s perfection/righteousness over our life (2 Corinthians 5:21).

Without repentance of sin and faith in Jesus as Lord, access to the Kingdom will be denied; in fact, even the Old Testament saints who died in righteousness with God were confined to Sheol-Paradise (Abraham’s Bosom/Luke 16:19-31) awaiting the coming Messiah who would shed His innocent blood for the sins of all mankind that would believe in Messiah as Lord.

Access to the Kingdom was not open to the Old Testament saints until Jesus provided Himself as the sacrifice for sin and while His body laid in the tomb, Jesus entered Sheol-Paradise and preached liberty and freedom via the Gospel to the saints and then led them into the Kingdom before His resurrection.

“For You will not abandon my soul to Sheol; Nor will You allow Your Holy One to undergo decay.” Psalm 16:10 (NASB)

“For Christ also suffered once for sins, the righteous for the unrighteous, to bring you to God. He was put to death in the body but made alive in the Spirit. 19 After being made alive, he went and made proclamation to the imprisoned spirits— 20 to those who were disobedient long ago when God waited patiently in the days of Noah while the ark was being built.” 1 Peter 3:18-20 (NIV)

‘But to each one of us grace was given according to the measure of Christ’s gift. 8 Therefore it says,

“When He ascended on high,

He led captive a host of captives,

And He gave gifts to men.”

(Now this expression, “He ascended,” what does it mean except that He also had descended into the lower parts of the earth? He who descended is Himself also He who ascended far above all the heavens, so that He might fill all things.)’ Ephesians 4:7-10 (NASB)

So then, from The Beginning, “faith” in God has been the KEY to righteousness (a right standing) with God the Father but Jesus Christ and His sacrifice for sin was essential for atonement i.e….a “payment in full” for the sin-debt of mankind and it is the atonement for sin earned ONLY by Jesus Christ that permits mankind to enter the Kingdom of God subsequent to the death of the body in Time to everyone who believes in Jesus as Lord!

“…we are of good courage, I say, and prefer rather to be absent from the body and to be at home with the Lord.” 2 Corinthians 5:8 (NASB) 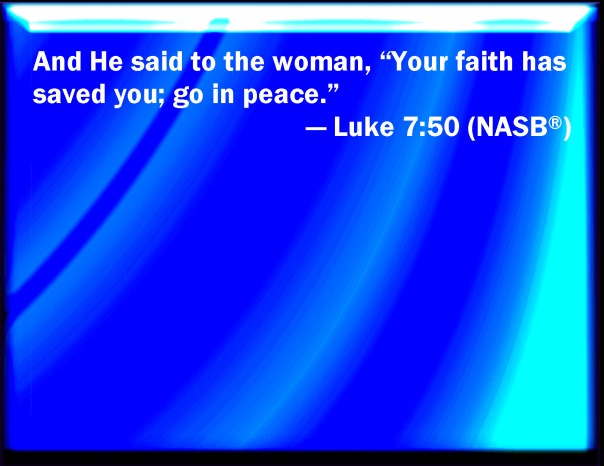