The Pharaoh and God; The Flood and God (Justice-Compassion or Cruelty?)

Unbeliever-Atheist uses God’s judgment concerning Egypt’s Pharaoh – The Passover to accuse God of senseless cruelty. Let’s discuss the Pharaoh/Passover and Noah/The Flood and causation for both seeing that the hypocritical atheist, when expedient, uses these scenarios to justify their path to death in sin and death in Hell by rejecting the Scriptures and God as cruel, bigoted, hateful; at other times, the hypocritical atheist denies the reality of the Exodus and The Flood and mocks the Scriptures as inaccurate.

Atheist, Susan D, stated: “Let’s talk about when god of the bible killed all those innocent babies and tormented all those innocent Egyptian peasants rather than to instead just target his wrath at the one guy with whom he was angry with, why not just kill Pharaoh and spare the innocent? This story, like so many others in the bibly [Bible], portrays god as one senseless and cruel.”

A response to the atheist

1. The Pharaoh and the Death Angel

The Pharaoh had been warned multiple times to free the Hebrew Slaves but he refused and God, who cannot lie (Numbers 23:19), fulfilled the prophecy of salvation/liberation concerning the Hebrew people from a land that would hold them captive as slaves for 400-years (Genesis 15:12-14). Though the Scriptures articulate that God hardened the Pharaoh’s heart, let it be known that God only used and subsequently allowed to manifest what was already present in the Pharaoh’s inner-man i.e. stubbornness, cruelty, deceit (Psalm 139:2).

Now when the sun was going down, a deep sleep fell upon Abram; and behold, terror and great darkness fell upon him. 13 God said to Abram, “Know for certain that your descendants will be strangers in a land that is not theirs, where they will be enslaved and oppressed four hundred years. 14 But I will also judge the nation whom they will serve, and afterward they will come out with many possessions. Genesis 15:12-14 (NASB)

1) Susan, you suggest that God, if He were fair and compassionate, would have killed the Pharaoh as opposed to the first-born of Egypt, but the death of Pharaoh would not have freed the Hebrew slaves but only embittered the Egyptian hierarchy resulting in increased cruelty toward the Hebrews and exponentially increasing their suffering.

2) Susan, in your unbelief, as you desire to mock God for His judgment upon the Pharaoh, the Egyptian people, remember that the Passover initiated by this Judgment on Egypt also represents the mercy of God given YOU at the Crucifixion of Jesus Christ as Christ is our Passover Lamb (1 Corinthians 5:7).

The lamb to be slain in Egypt was to be without defect (perfect) and the blood of that spotless lamb was to be painted upon the sides and tops of the door-frames (Exodus 12:4-7) in order that the Death Angel would “pass-over” that home. This edict of our Lord to the Hebrew slaves was also a Messianic prophecy to be fulfilled by the “Lamb of God” (Messiah Yeshua) whose innocent blood would stain the cross-member and upright of a Roman Cross in Jerusalem, Israel.

As the Lord commanded the Hebrew people to paint the blood of a lamb (sheep or goat) upon the doorposts so that the death-angel would “pass-over” their home and spare the first-born from death, so does the innocent blood of Messiah on that Roman Cross provide mankind a way of escape from death in sin and death in Hell (2 Corinthians 5:21).

Concerning Jesus as our Passover Lamb

“knowing that you were not redeemed with perishable things like silver or gold from your futile way of life inherited from your forefathers, but with precious blood, as of a lamb unblemished and spotless, the blood of Christ.” (1 Peter 1:18-19)

3) Every child that died in somber sleep that horrific night in Egypt was fully secure in our Lord because God does not hold culpable those lacking sufficient cognitive maturity to discern right from wrong, moral from immoral (Romans 5:12-14); therefore, every child that died in Egypt on that Passover Night was saved and they are now, in their disembodied spiritual state, secure in our Lord forever, fully conscious and fully aware, in His Kingdom as I type this. Had these Egyptian children matured in Egypt’s pagan culture, they would have died and ended-up in Sheol/Torments (Luke 16) and eventually they would face Judgment in Eternity and subsequently lose their resurrected body and soul in Hell forever (Revelation 20:11-15; Matthew 10:28).

The Lord’s judgment upon the Pharaoh was keeping with God’s faithfulness to His written word/prophecy and the liberation of the Hebrew slaves while the Judgment upon the first-born was actually God’s compassion and mercy as those children received Eternal life with God forever as opposed to dying in sin and Hell without hope!

2. Noah’s generation and The Flood and atheistic hypocrisy

Like the incident with Pharaoh and the Death Angel/the Passover, the atheist is quick to accuse our Creator of genocide, murder, infanticide, as a result of The Flood. I must chuckle slightly when I think about the hypocrisy of the deceived atheist as they’re quick to cuddle-up to Darwin and heretical “scholars” who deny the Noahic Flood and the Exodus, but when it fits their demonic narrative, the atheist is quick to use the Exodus and The Flood scenarios to accuse God of being a sadistic maniac.

Subsequent to The Fall of Adam/mankind and the curse upon the Human Genome as a result of that Fall culminating in spiritual death and physiological death, mankind began a rather expedient/exponential fall into violence and sexual debauchery-immorality as demonstrated by the generation of Noah along with the Nephilim that were present in the land at that time. The Holy Spirit describes Noah’s generation thusly…

“Then the Lord saw that the wickedness of man was great on the earth, and that every intent of the thoughts of his heart was only evil continually. The Lord was sorry that He had made man on the earth, and He was grieved in His heart. 7 The Lord said, “I will blot out man whom I have created from the face of the land, from man to animals to creeping things and to birds of the sky; for I am sorry that I have made them.” 8 But Noah found favor in the eyes of the Lord.” Genesis 6:5-8 (NASB)

Beginning with Genesis 3:15, immediately subsequent to The Fall of Adam, we see our Creator preparing to bring forth His Messiah through the seed of the woman (a virgin) and this prophecy tells us that Messiah, the One who would defeat the works of Lucifer, would be victorious and conquer sin and death. Ultimately, this was accomplished at the Crucifixion some 4000-years later.

Concerning the curse on Lucifer and the impending struggle with Messiah

“And I will put enmity Between you and the woman, And between your seed and her seed; He shall bruise you on the head, And you shall bruise him on the heel.” Genesis 3:15 (NASB)

The generation that arose between the time of Adam and Noah (pre-flood) had become so wicked and vile that our Lord refused to set-apart a people group through whom He would bring forth His Messiah. Our Lord used the testimony of Noah’s work on the Ark to warn that wicked generation, much like God warned the Pharaoh, of the coming judgment; unfortunately, much like the hardened atheist today, Noah’s generation mocked, ridiculed, and refused to listen.

“For if God did not spare angels when they sinned, but cast them into hell and committed them to pits of darkness, reserved for judgment; 5 and did not spare the ancient world, but preserved Noah, preacher of righteousness, with seven others, when He brought a flood upon the world of the ungodly; 6 and if He condemned the cities of Sodom and Gomorrah to destruction by reducing them to ashes, having made them an example to those who would live ungodly lives thereafter; 7 and if He rescued righteous Lot, oppressed by the sensual conduct of unprincipled men 8 (for by what he saw and heard that righteous man, while living among them, felt his righteous soul tormented day after day by their lawless deeds), 9 then the Lord knows how to rescue the godly from temptation, and to keep the unrighteous under punishment for the day of judgment, 10 and especially those who indulge the flesh in its corrupt desires and despise authority.” 2 Peter 2:4-10 (NASB)

God’s salvation to the World through judgment by water

Because of the wickedness of Noah’s generation, God chose to save righteous Noah and the seven-members of Noah’s family and destroy the wicked seed of that pre-flood generation in order to begin anew and further His Plan to bless the World through the coming Messiah. Subsequent to the Noahic Flood, we see our Lord set-apart a people group specifically for Himself via the patriarchy of Abraham, Isaac and Jacob AKA Israel.

Speaking of the Jewish people

Concerning the coming Messiah and the Jewish people, our Lord prophesies to Abraham,

“And I will bless those who bless you, And the one who curses you I will curse. And in you all the families of the earth will be blessed.” Genesis 12:3 (NASB)

Had our Lord not begun anew with a generation born from the favorable lineage of Noah but permitted the wicked and vile pre-flood generation to exponentially increase in number and in vile-sexual-violent debauchery, our Messiah would have never entered into the World and all of mankind would have been ultimately condemned to die in sin and die in Hell; thereby, thwarting God’s Plan of victory over Lucifer, sin, death, Hell, the grave.

The children of the wicked pre-flood generation, like the children of Egypt at the Passover, those children not having attained an age of reason/accountability possessing sufficient discernment to differentiate between good v. evil, right v. wrong, those children were saved by our Lord upon death of the body and their disembodied spirit, fully cognizant and fully aware, is now present with our Lord in the Kingdom of God awaiting the resurrection of the righteous (John 5:29).

In both scenarios, the Pharaoh and the Noahic Flood, we see our God’s justice, righteousness, truthfulness, compassion, abound and the wise man and woman will internalize the surety of God’s judgment and wrath toward the rebellious and wicked while God’s compassion and forgiveness blankets the righteous, the humble, the faithful.

Mankind, if wise, will learn from these scenarios and find life in God’s Plan through Jesus Christ as Lord -or- if unwise, mankind will choose to reject God’s warning through these examples in Scripture and ultimately die in sin and die in Hell in God’s wrath and righteous judgment. 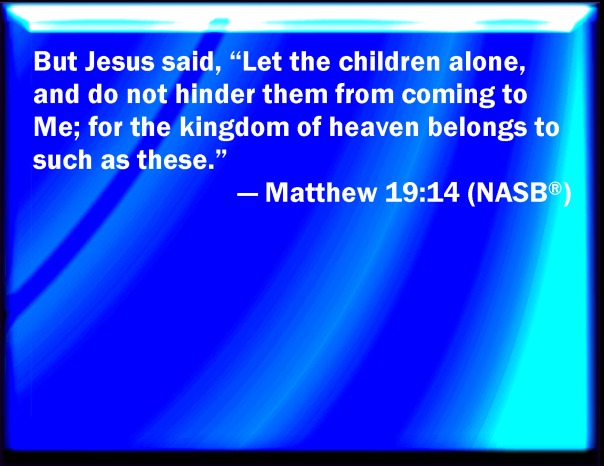