1) disbelief or lack of belief in the existence of God or gods.

Premise: Darwin’s Theory of Evolution is the most proficient and efficient progenitor of modern-day Atheism; Evolutionary Theory is the most deceptive form of spiritual death introduced by Satan subsequent to his deception of Eve in The Genesis.

It is my position as one who loves, adores, respects, God the Father, Jesus Christ, the Holy Spirit, that Atheism does NOT exist in reality but is a demonically-based sociological construct, a Satanic ideology emanating from the mind and will of Satan as a most destructive weapon to conquer the free will of men and women possessing a predisposition to rebellion to authority; narcissism; sexual perversion with an obsessive-compulsive personality-type as well as men and women who have been trapped in man’s various cults and “religions” and the Hell on Earth these bastions of enslavement manifest in the life of one so deceived.

The Holy Spirit confirms the deception of “Atheism” and clearly articulates that this sociological construct does NOT exist but in the mind of individuals seeking to justify their sin by denying that which they intuitively know exists i.e. the Creator of the Universe.

“For the wrath of God is revealed from heaven against all ungodliness and unrighteousness of men who suppress the truth in unrighteousness, because that which is known about God is evident within them; for God made it evident to them. For since the creation of the world His invisible attributes, His eternal power and divine nature, have been clearly seen, being understood through what has been made, so that they are without excuse. For even though they knew God, they did not honor Him as God or give thanks, but they became futile in their speculations, and their foolish heart was darkened. Professing to be wise, they became fools, and exchanged the glory of the incorruptible God for an image in the form of corruptible man and of birds and four-footed animals and crawling creatures.

Therefore God gave them over in the lusts of their hearts to impurity, so that their bodies would be dishonored among them. For they exchanged the truth of God for a lie, and worshiped and served the creature rather than the Creator, who is blessed forever. Amen.

For this reason God gave them over to degrading passions; for their women exchanged the natural function for that which is unnatural, and in the same way also the men abandoned the natural function of the woman and burned in their desire toward one another, men with men committing indecent acts and receiving in their own persons the due penalty of their error.

And just as they did not see fit to acknowledge God any longer, God gave them over to a depraved mind, to do those things which are not proper, being filled with all unrighteousness, wickedness, greed, evil; full of envy, murder, strife, deceit, malice; they are gossips, slanderers, haters of God, insolent, arrogant, boastful, inventors of evil, disobedient to parents, without understanding, untrustworthy, unloving, unmerciful; and although they know the ordinance of God, that those who practice such things are worthy of death, they not only do the same, but also give hearty approval to those who practice them.” Romans 1:18-32 (NASB)

1) The primary causation of Atheistic deception is the craftiness and subtleness of Satan’s enticement of Human KIND to compromise and relativize the objective moral law as infused within mankind by our Creator at conception (Romans 2:15). Certain individuals, particular personality-types appear to be more prone to Satan’s deception as they inherently struggle with a compulsive-addictive personality; a deeply ingrained infatuation with aberrant lust initiated by any number of formative causative factors ranging from childhood sexual abuse to exposure to pornography in the very early formative years of cognition; an abusive-neglectful-fragmented family-unit during early childhood; forced inclusion in deceptive cults and religions that enslave the mind and soul to traditions of men that insult the simplicity and purity of God’s Covenant of Grace i.e. the Gospel of Jesus Christ.

2) The most profound and intriguing causation of modern-day Atheism is the infusion of Darwinian Evolutionary Theory into the public education system as in early 1960’s America. Having successfully removed the Holy Bible, Jesus Christ, prayer, from the classrooms via various SCOTUS decisions in the early 1960’s, Progressive Socialists successfully strategized a formula of socialistic ideological implementation into the hearts and minds of America’s youth via revisionist history and Darwin’s Theory of Evolution which was a powerful demonic tool that successfully warred against the Genesis creation narrative of the Holy Scriptures thereby negating our Creator’s influence for good in society and replacing same with Satan’s naturalistic ideology of moral relativism; a demonically-seductive ideology that teaches our children the deceptive paradigm “if it feels good, do it” because there are no spiritual ramifications for sin which is nonexistent; there is no accountability for disobedience; no remorse for expressing and experimenting with aberrant lust; no sorrow for abusing, using, demeaning one’s self and others through sexual expression; because there is no judgment, there is no holy authority, there is no Hell.

Without a doubt, Darwin’s idiocy is the most proficient and efficient progenitor of modern-day Atheism and Evolutionary Theory is the most deceptive form of spiritual death introduced by Satan subsequent to his deception of Eve in The Genesis.

Darwinian Theory: What are children learning? A succinct overview…

Though the staunch Evolutionist/Atheist will deny that Evolution encompasses the subject of origin of life, the fact remains, Evolution is inexorably linked to such preposterous presuppositions as,

Subsequent to a High School public education in America, an overwhelming number of students graduate with a degree that is made impotent by revisionist history and Darwin’s insanity culminating in a hatred for God, the Bible, the Truth, America; unfortunately, only a “few” will find their way home to life in Jesus Christ and life in Eternity.

During their tenure in America’s secular Universities, the student’s deception in Darwin’s idiocy and revisionist socialist history is further honed and deeply embedded into the hearts and minds of America’s future leaders who are now radical Atheists, Socialists, abortion-advocates/participants, radical LGBTQ participants-advocates while America’s Constitutional Republic dies with each election-cycle as these godless, Atheistic-Socialists, enter the voting booth in ever-increasing numbers to cast their vote for Hell.

It is also interesting to study the inexorable link between Darwinism and Margaret Sanger – Eugenics-Abortion (mutilation of countless-millions of babies); Darwin and Hitler – the Holocaust; Darwin and Stalin’s rejection of our Creator and his glorification of atheism and murder subsequent to reading Darwin’s evolutionary ideas.

Darwin has proven to be Satan’s most deadly ally when one considers the death toll of abortion, eugenics, socialism, communism and the totality of mankind that will die in sin and die the “second death” in Hell because the Atheist, those rejecting God’s Covenant of Grace, opted to glorify Satan through an alliance with Darwin’s deceit while rejecting the Truth of Scripture and the Lord of Life, Jesus Christ.

“Richard Dawkins not only regards Darwinism as compatible with atheism, but that atheism is a logical outcome of evolutionary belief. He has long promoted atheism both individually and as part of atheistic organizations.”

3) The most telling, defining, behavior within the Atheistic community is a radical addiction to homosexuality and lesbianism that has suffered greatly from the sociological/behavioral phenomenon of “diminishing returns” as the immoral, rebellious, act of homosexuality and lesbianism is no longer adequate to satiate the obsessive-compulsive desires of the flesh, but in our “day of enlightenment,” the homosexual/lesbian now finds it necessary to indulge in gender mutilation, gender transformation, gender confusion, and reject the reality of God’s creation of the male and female; Today, the LGBTQ community has constructed as many as 4000-genders while pedophiles clamor for legitimacy and inclusion in the infamous acronym.

The ultimate and tragic end of such confusion is psychosis, addiction, self-mutilation, self-loathing, suicide, for far too many. Most tragically, it is America’s most vulnerable, most innocent, most precious, that are reaping the horrors of this confusion i.e. our teenage and pre-teen posterity, far too many of whom end their life in addiction, obsessive-compulsive disorders, suicide.

Atheism, for all intents and purposes, does not exist in reality but is simply a demonically-based sociological construct of deception, obfuscation, that was initiated by Satan, the enemy of our soul, and introduced to our posterity by Darwin’s idiocy which has manifest in societal rejection of God’s Truth, the Bible’s Genesis narrative of creation thereby resulting in Satanically-motivated moral relativism, secularism, nihilism, leading to the psychological – physiological – spiritual death of America’s children and America’s Constitutional Republic.

The only “cure” to the demonic death of Atheism is a relationship with God the Father by grace through faith in Jesus Christ as Lord and this Covenant Relationship having been Sealed and Guaranteed by the indwelling Holy Spirit of God; I therefore plead with the Atheist, repent and reject the path of the “many;” reject Darwin, reject Satan, turn to Jesus Christ and live! 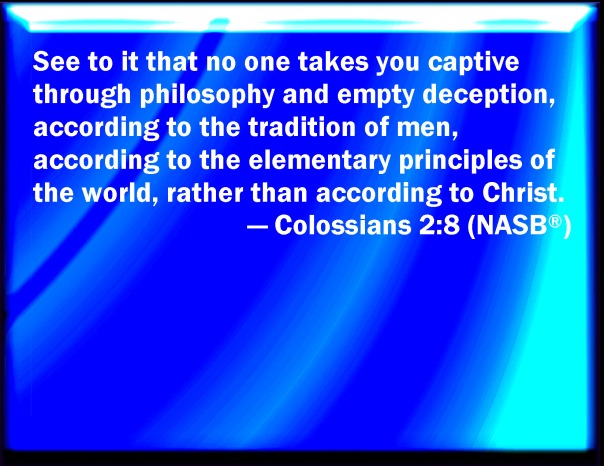