My evening at the Harley Dealership in Fort Smith, Arkansas…5 Aug. 2016

Had dinner this evening with a gentleman who was/possibly is going to offer his services as a witness in my Federal Lawsuit if I can convince the 8th Circuit Court of Appeals to bring the Biker Rally/Motorcycle Noise lawsuit before a jury.

The witness had mentioned that he recently went to a Harley Dealership in Fort Smith, AR and purposefully searched for the EPA muffler label on the Harley products on the showroom floor. The gentleman was rather confused stating that he did not see a single motorcycle muffler with any sort of label on the muffler canister as I had described in an earlier conversation.

After dinner, we drove to the Old Fort Harley Davidson Dealership in south Ft. Smith and began looking at the new motorcycles on the showroom floor. I was successful in locating the EPA muffler label on the motorcycles equipped with their factory-installed muffler, but actually viewing the label required one to get down on their hands and knees and, when viewing the motorcycle from the rear with the oval shape of the canister viewed as a clock face, the label was at a low 4 or 5 O’Clock position – I’m assuming that Harley Davidson considers “readily visible location” to be “subjective” and in reference to the amount of difficulty one must exert in order to actually view the label.

As we moved into the main showroom area, I walked down a line of what appeared to be factory fresh Harley Davidson motorcycles, but when I walked up to a Harley Dyna (?) positioned in front of the sales office I noticed the new looking Harley was equipped with a Vance and Hines Short Shot exhaust that emits approximately 110 dB(A) under acceleration and audible for up to and possibly over one-mile…a stark violation of Federal and State law. 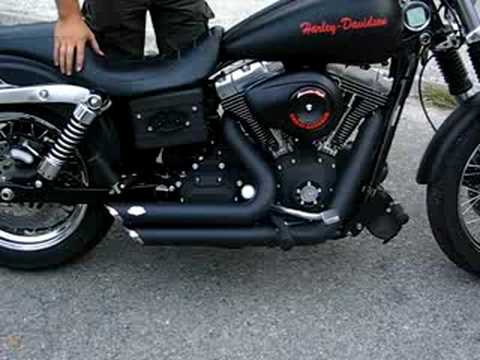 The Gentleman that had accompanied me to the Dealership asked if the Vance and Hines were legal at which time a salesman exited the nearby office and politely asked if he could help us?

My companion asked the salesman if the Vance’s were legal and the salesman replied “yes”…I interrupted and made the statement that if I were in a patrol function I would cite the operator and do my very best to incarcerate him for operating that particular motorcycle on a public roadway. The salesman, a very polite young man, responded with a stunned look and asked other salesmen or sales managers to come to our location…the salesman looked over at who was apparently management for the Dealership and asked him if the Vance and Hines were legal…the manager’s response was a rather boisterous “YES” and the management person put forth a card of paper stating that according to these people and those people the Vance and Hines were legal in 49 States and that in Arkansas motorcycles noise emissions were permitted up to 92 decibels.

Another manager joined in on the conversation and they began looking for information on the Internet relevant to motorcycle noise legal limits. I asked them to plug-in the Arkansas State muffler law, but they were having difficulty locating the Website and asked if I would speak into the phone and perhaps locate the Arkansas Traffic Law for vehicle mufflers, 27-37-601.

(a) Every motor vehicle shall, at all times, be equipped with a factory-installed muffler or one duplicating factory specifications, in good working order and in constant operation, to prevent excessive or unusual noise and annoying smoke.

Then I asked management to read subsection (b) which states that it is illegal to “sell” a muffler within the State of Arkansas that does not conform to the specifications of the “factory-installed muffler.”

Silence – then, the question…”Well then, why are they allowing us to sell them?

I replied that Arkansas’ State Police Director, Colonel Bryant, [and AG Leslie Rutledge] was too apathetic and unconcerned to actually enforce the law and that if the Arkansas regulatory enforcement entities were interested, they would simply shut the motorcycle retail facility down.

I asked the sales person if they had a display rack of aftermarket exhaust mechanisms and he replied: “No, there is no display case.”

The sales manager, or some form of management for the Harley Dealership, made an interesting comment about why law enforcement does not bother with writing illegally LOUD motorcycles. He grinned and said that there are so many police officers who ride illegally LOUD that nothing would be done – the manager for Harley spoke of the number of officers that rode illegally LOUD in the Fort Smith area on non-compliant LOUD motorcycles and the “club” – “Gang” affiliation of law enforcement groups in the area…

These salesmen and management, though they read the law for themselves, were not concerned in the slightest and as I exited the Harley Dealership as it was closing for the evening, the sales manager or upper management that I had spoken with a few minutes earlier rode off on an incredibly LOUD Harley with what he referred to as RC (?) aftermarket exhausts…this guy was LOUD and exited the Dealership with not a care or concern about the people he was assaulting or the quality of life of the citizens he would disrupt and destroy on his commute back home.

My day at the Harley Dealership,

The “Truth” about Loud Motorcycles the Police Won’t or Can’t tell you: https://rickeyholtsclaw.wordpress.com/2016/03/10/the-truth-about-loud-motorcycles-the-police-wont-or-cant-tell-you/

4 thoughts on “My “LOUD” Evening at the Harley Dealership – “The Truth Shall set you Free!””