Theological question posited on FB: “Is the death of Jesus Christ actually substitutionary if Jesus never suffered for our sins in Hell?”

To adequately respond to this question a number of theological truths must first be established,

1) Hell was not created for mankind but for Satan and the angels that followed him in the rebellion that manifest in the Kingdom of God before the beginning of Time. Mankind will enter Hell by (metaphorically) climbing directly over the Cross of Jesus Christ; that is, mankind will enter Hell by rejecting the pardon from death in sin and death in Hell freely offered by God the Father by grace (unmerited favor) through faith (trusting-believing) in the Son, Jesus Christ, and Jesus’ atoning work for mankind at the Crucifixion (John 3:16).

(2) Spiritual death concerning the eternal soul/spirit of mankind that was, in The Beginning, created in the spiritual image of God denoting the truism that certain communicable attributes of God were infused within the genomic programming of mankind (Genesis 1:26-28).

As a result of the Adamic curse, mankind is born with an inherited sin-nature (Romans 5:12; 1 Corinthians 15:21) and is therefore a sinner (Romans 3:23) living in opposition to the Holiness of God and separated from God as a result of that sin. It is this spiritual death through the sin-nature and the resulting sin of mankind that Jesus Christ, in His substitutionary death, took upon Himself as our propitiation (atonement) for sin and paid via a physiological death the spiritual price for sin i.e. spiritual separation/spiritual death from God the Father; Jesus Christ, through the Crucifixion, offers all of mankind a pardon from death in sin (spiritual death and the “second death” in Hell) and that pardon is ascertainable by the whole of mankind (John 3:16; 1 Timothy 2:4) if one humbles them self before God the Father, admits they’re a sinner, repents of their sin and sincerely believes in their heart, confesses with their mouth that Jesus Christ is God who died to pay their sin-debt and they believe that Jesus was resurrected from the dead for their justification leading to enteral life (Romans 10:9-10). Some will argue that Jesus Christ did not suffer the ramifications of spiritual death upon the Cross but I remind them that Jesus, in agony and horror, cried-out concerning His separation from the Father during those excruciating hours of fighting suffocation and impending death; Jesus having been forsaken by the Father on our account as Jesus suffered the ramifications of sin i.e. separation from God’s Holiness – Perfection (Psalm 22:1-2; Matthew 27:46).

Jesus Christ died for the physiologically living (with the exception of the Old Testament Saints awaiting His atonement in Sheol) and the spiritually dead NOT the physiologically dead who have died in unrepentant sin. Jesus Christ did NOT die for the physiologically dead; in other words, those who die within the Age of Grace (New Testament-New Covenant dispensation) having rejected the pardon from death in sin and death in Hell offered them by grace through faith in Jesus as Lord, they depart the Realm of Time with ONLY an expectation of Judgment that will ultimately culminate in the “second death” in Hell (Hebrews 9:27; Revelation 20:11-15). When a man or woman dies in the current Age of Grace and they die in their unrepentant sin (John 8:24) there remains no provision of God’s grace or mercy as God the Father’s offer of forgiveness and redemption through faith in Jesus as Lord ends with mankind’s last exhalation in the Realm of Time.

It’s of necessity that one understands the reality that Jesus Christ is God who died for the physiologically living; that is, those who are alive in the body but dead in the sin-nature i.e. spiritually dead. It is Messiah’s substitutionary atoning death and His payment for mankind’s sin-debt i.e. that sin-chasm that separates mankind from the Holiness of God the Father, that provides mankind an opportunity to receive, by grace through faith, a new life in the Spirit of God manifesting in a rebirth of mankind’s spirit i.e. spiritual death gives way to spiritual life (“you must be born again” John 3) for the one who believes in Jesus as Lord (John 3:3).

So then, we see that Jesus’ substitutionary death specifically paid for the sin of the living in body not the dead in body as those who die in the body in unrepentant sin enter another dispensation that is not covered by the atoning blood of Messiah as the ultimate consequence of dying in unrepentant sin is the “second death” in Hell which is outside of the forgiveness offered mankind by faith in Jesus’ atoning death. Though Jesus died to provide mankind forgiveness of sin and thereby establish the possibility for a personal relationship with God the Father through the Holy Spirit, it was not necessary that Jesus suffer in Hell for the payment of sin because Hell is relevant only to those who reject Jesus Christ as Lord and die in unrepentant sin and again, there is no grace available subsequent to the last exhalation in Time. 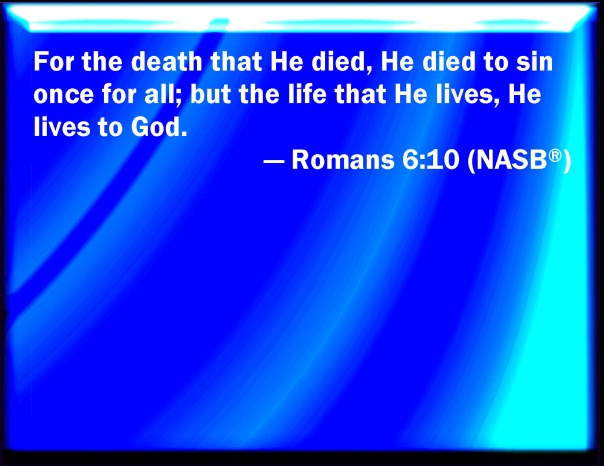