Atheist, Mark D, stated: “Most Christians think that we are living in the last days, and in my view that is Grade A b–lsh-t! The truth of the matter is Jesus is NOT coming back. He died over 2000 years ago and, like any other dead person, he is never to return.”

The 2nd-Advent of Messiah-Yeshua was not possible until the rebirth of the Nation of Israel in 1948 and the capture of Jerusalem from Arab domination in 1967…an irrefutable fulfillment of Ezekiel’s prophecy of Israel’s regathering.

“I will bring them out from the peoples and gather them from the countries and bring them to their own land; and I will feed them on the mountains of Israel, by the streams, and in all the inhabited places of the land.” Ezekiel 34:13 (NASB)

If one studies eschatology and possesses the indwelling Holy Spirit of Truth, the signs of the Times are unmistakable/irrefutable. Even your scoffing at Jesus’ return is a sign that our Lord is preparing all things for That Day of the coming Apocalypse in Jerusalem, Israel, a nuclear war initiated by Islam-Allah v. Israel-Yeshua, that will initiate Yeshua’s Millennial Reign upon the Earth.

Yeshua-Messiah is returning as He has promised and if you are found living in rejection of Messiah as Lord for the mediation of your sin, you will experience unconscionable tribulation and suffering.

“For then there will be a great tribulation, such as has not occurred since the beginning of the world until now, nor ever will. Unless those days had been cut short, no life would have been saved; but for the sake of the elect those days will be cut short.” Matthew 24:21-22 (NASB) 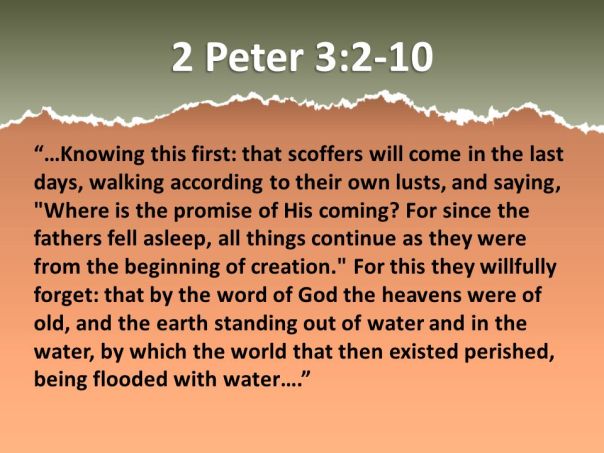