[31 October 2015] LETTER TO DIRECTOR OF THE ARKANSAS STATE POLICE: Seeing that Governor Hutchinson refuses to respond to my concerns; seeing that Attorney General Leslie Rutledge has denied any jurisdiction, responsibility, culpability, relevant to my concerns and pointed her finger at the Arkansas Department of Environmental Quality; seeing that the Arkansas Department of Environmental Quality has denied any responsibility and has pointed the finger at the Arkansas State Police and Local Law Enforcement as culpable for the out-of-control vehicular NOISE debacle within the State of Arkansas, I have written Colonel Bill Bryant, Director of the Arkansas State Police, the following letter.

My name is Rick Holtsclaw, I am a retired 31 year veteran of the Houston Police Department and currently reside in the big City of Uniontown, Arkansas. I see from your biography that you served as a Police Officer at Sam Houston State University during the years I attended there seeking my undergraduate degree subsequent to a tour of duty with the United States Marine Corps. Congratulations on your impressive success in the Law Enforcement Community!

Colonel, for the past seven-years I have been in a battle of incredible proportions, a battle that rivals that of “big tobacco” of decades past. My last two-to-three years with the Houston PD and the years following have been consumed with my efforts to resolve a vehicular noise debacle that is completely out-of-control in our Nation. I will include, subsequent to this text, three of six videos I have recently published on Youtube relevant to the illegal operation of non-compliant, illegally LOUD, automobiles, trucks and motorcycles. Vehicles whose owners have illegally modified them to emit noise emissions that are many times over the legal, compliant, noise level restricted by the Environmental Protection Agency (EPA) and in stark violation of Arkansas’ Traffic Law relevant to motor vehicle mufflers.

As an example, Arkansas is inundated with motorcycles that have been either illegally modified via tampering with the OEM factory-installed muffler or the owner has removed the compliant factory muffler and replaced it with an illegal aftermarket exhaust emitting between four to eight or more times the legal 80 dB(A) total motorcycle noise emissions as mandated by the EPA – 80 dB(A) being the “minimum” level of protection for the general public (note: db’s are calculated via logarithmic scale).

These LOUD motorcyclists operate on the roadways of Arkansas and within our communities completely unencumbered by law enforcement as they assault our children, our elderly, our handicapped, our families and by doing so, they deny the citizens of Arkansas the right to domestic tranquility, the right to pursue happiness, the right to equal protection under the law as our law enforcement community turns a blind eye and deaf ear to this stark violation of the Code of Federal Regulations and Arkansas’ Motor Vehicle Laws – specifically:

Colonel, I will not take-up much more of your time with this initial Email, but I do sincerely ask that you please respond to the following questions:

1) Why are the roadways of Arkansas inundated with motorcycles, automobiles, trucks, that are illegally modified or illegally equipped with exhaust mechanisms that, in no way, conform to the specifications of “factory-installed muffler or one duplicating factory specifications”? Why has the Arkansas State Police failed to interceded on behalf of the citizenry they swore to protect and serve?

Why are the selfish, entitled, disrespectful, operators of illegally equipped, illegally loud motor vehicles in Arkansas permitted to operate their LOUD motor vehicles upon our roadways and within our communities and simultaneously assault our children, our elderly, our handicapped, our families with unregulated, dangerous, intrusive, illegal, NOISE? Motor vehicle noise emissions that have been confirmed as physiologically and psychologically dangerous to the Citizens of Arkansas by the World Health Organization, the United States Congress, the United States Environmental Protection Agency and a sundry of similar studies readily available on the Internet.

2) Why are there so many retail facilities in Arkansas that openly sell and install mufflers or apparatuses for mufflers that do not conform to the “factory-installed muffler or one duplicating factory specifications”? This is in stark violation of section (b) of the above cited muffler law which says: “nor shall any person sell for use on a motor vehicle upon the public roads, highways, streets, or alleys of this state, a muffler, other than as deﬁned in subsection (a) of this section.”

Colonel, please listen to the first video following the body of this Email which provides evidence of this violation in Arkansas. For a better understanding of the disingenuous/illegal marketing strategies used by the motorcycle aftermarket exhaust industry to peddle their “closed course” exhausts that are illegally labeled and used on street motorcycles see: http://www.dealernews.com/dealernews/article/shades-gray-selling-and-installing-aftermarket-exhausts-and-legal-liabilities-dea.html

Why do we, as Arkansas Citizens, have to endure the NOISE assault of these illegally LOUD motorcyclists as they proceed to these biker rallies and as they leave these biker rallies via our Interstates and adjacent Municipalities? What activities at these biker rallies require the attendees to operate illegally LOUD motorcycles? In other words, what transpires at a motorcycle rally that could not transpire atop a legal, quiet, EPA-compliant, Arkansas Muffler Law – compliant, motorcycle? Why must the Citizens of Arkansas endure the ILLEGAL, intrusive, irresponsible, NOISE of the Loud Motorcycle Cult[ure] while the Mayor hosting these NOISE-fests prostitutes himself/herself for the MONIES and TAX REVENUE designated for the city coffers? 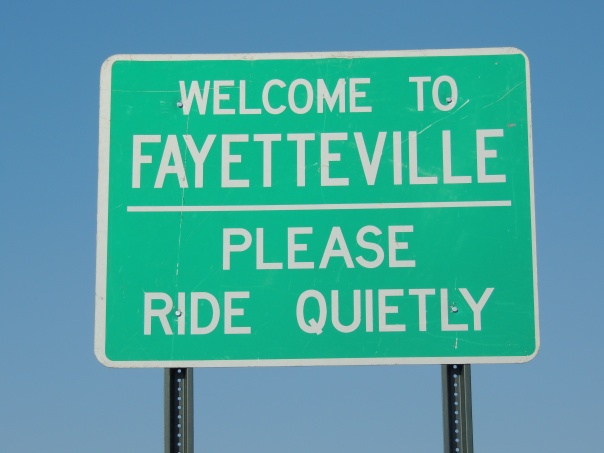 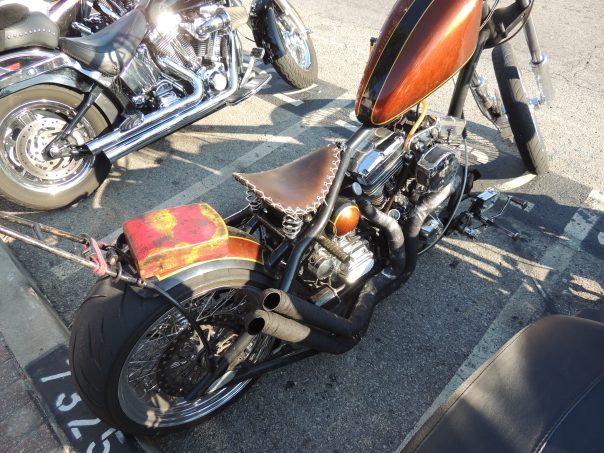 A representative dealership for Harley Davidson Motorcycles has told us that 80% of their new motorcycle purchasers make their first performance upgrade the installation of an illegal aftermarket exhaust mechanism, a LOUD aftermarket exhaust mechanism. It’s not a stretch to suggest that the metric or import riders make the change to their mufflers at approximately the same statistical ratio; therefore, if 10,000 motorcycles are present at the Bikes, Blues, BBQ Motorcycle Rally in Fayetteville, some 8000 of those motorcycles are illegally equipped and spewing decibel levels that are two-four-six or more times the safe level of 80 dB(A) and many are also spewing particulate/pollutant levels up to 10 times the rate of one (1) compliant automobile. Why is this permitted to take place within the State of Arkansas, especially seeing that our State Code clearly articulates the fact that a motor vehicle is NOT allowed to operate on our our roadways without a “factory-installed muffler or one duplicating factory specifications”?

4) Governor Hutchinson refuses to address this situation, in fact, Governor Hutchinson won’t even discuss the situation with me and Attorney General Rutledge denies having any authority or jurisdiction over these concerns. Is there NO ONE responsible for the health, safety, protection, Constitutional oversight, of the Citizens of Arkansas?

5) I have attempted to seek civil redress against Mayor Sanders and Mayor Jordan and the State of Arkansas for their graft and their prostitution with the Loud Motorcycle Cult[ure] and failure to protect the Citizens of Arkansas from the vehicular NOISE thugs roaming unencumbered within our communities, but I have, thus far, been prevented from seeking justice as the result of the archaic and unconstitutional doctrine of “Sovereign Immunity.” Why am I, as a United States Citizen, unable to hold my leadership accountable for their nonfeasance and their failure to uphold their oath of office? Why am I denied equal protection under the law?

6) Colonel, why is the Arkansas State Police, the Highway Patrol, not regularly citing the operators of illegally equipped, illegally LOUD motor vehicles? Do you not care for the health and safety of our citizenry, the health and safety of our children, our elderly, our handicapped who are most susceptible/vulnerable to the noise assault of the Loud Motorcycle Cult[ure]? Colonel, why are you allowing this miscarriage of justice that destroys the quality-of-life for so many in Arkansas to continue?

Colonel, I am so very tired of being ignored and my efforts countered with obfuscation. I’m not sure what it’s going to entail, but things have got to change and as an old stubborn Marine and retired Cop, if the Lord wills it, I am here for the long haul…please help and please get involved.

For evidence of the violations taking place within the State of Arkansas relevant to the operation of illegally LOUD motor vehicles and the retail of illegal aftermarket exhaust mechanisms, please watch the following video:

https://www.youtube.com/watch?v=jx8PM8KUvZM My experience as a Houston Police Officer dealing with the operators of LOUD motor vehicles in Houston, Texas.

Loud Motorcycles and the US EPA – A Plea for Intercession: https://rickeyholtsclaw.wordpress.com/2016/09/16/loud-motorcycles-the-epa-a-plea-for-intercession/